Biloxi, Miss. August 7th Tommy Ivo, from Burbank, California, feature attraction at the Gulf Coast Drag Strip, put on a magnificent performance of speed and coordination between man and machine as he turned in the 9 second bracket at 160 mph.

The movie and TV star stood by his car signing autographs and answering questions to many inquestions drag racers around him. His car is a beautiful red machine, richly chromed in perfect taste and is powered with two Buick engines. With skillful handling of his dragster Tommy Ivo turned on the steam to defeat our regular Top Eliminator of the day.

In regular eliminations, Tony DiBenedetto of Hammond Louisiana driving the Frank's Radio Special, a Chevy powered dragster, defeated Paul Vanderley of Biloxi driving his blown Chrysler dragster, by a scant two car lengths in Top Eliminator of the day in 10.56 seconds at 124 mph.

Ivo approached the starting line beside DiBenedetto to see how the local boys could do against a World's Champion. The crowd was on it's feet and silence prevailed as the flagman looked to both men and gave his nod. Both machines were off in a cloud of burning rubber and as the smoke cleared DiBenedetto was holding a slight lead over the champ. The crowd went wild in anticipation of an upset. When Ivo was about three fourths of the way down the strip he turned on the power and went flying through the trap in 9.6 secs to 160.69 mph to defeat the local boy by five car lengths.

In Little Eliminator, Marion Walton driving his Chevy powered, Devon sports car was up to his old tricks again in defeating all comers for the trophy. He found the going plenty rough as his principal rival, B.C. Naguin, driving his hot Corvette came close to winning as Walton had only a one car length lead as they went through the traps. The winning time was 12.02 at 138 mph.

This event was featured on page #1 in Drag News Newspaper.

TV. Tommy Ivo and crew man Don Prudhomme made their way across country from Georgia to Wisconsin to Biloxi within a few weeks.

This Twin Engine Buick dragster is on display at the Don Garlits Museum of Drag Racing in Ocala, FL

Snake and Mongoose is a 2013 film about Don "The Snake" Prudhomme and Tom "The Mongoose" McEwen, the greatest rivalry and friendship in drag racing history. 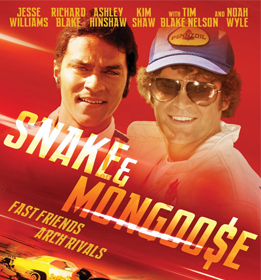